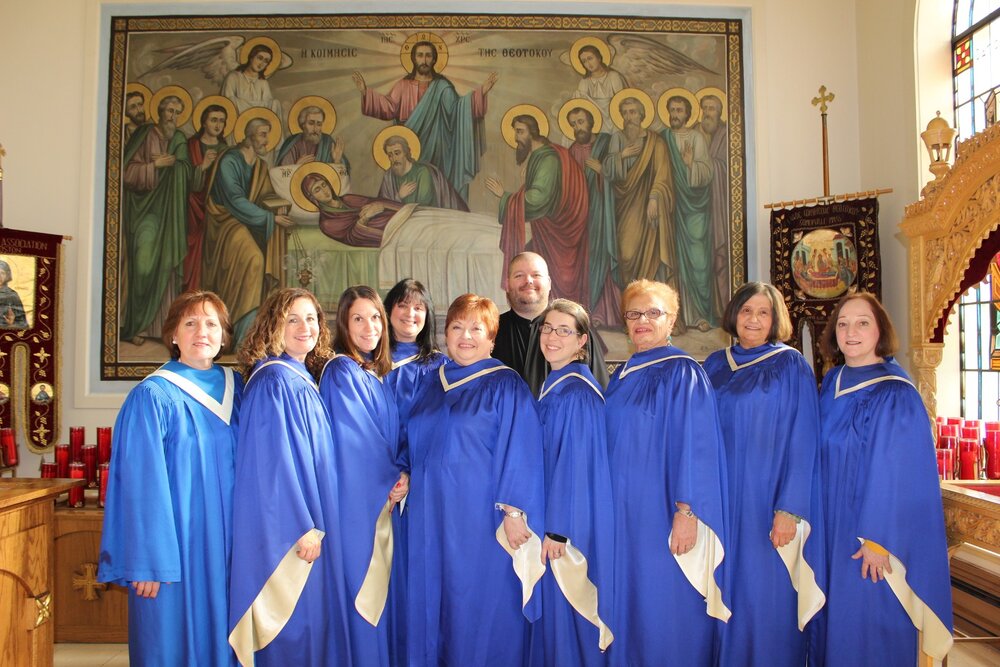 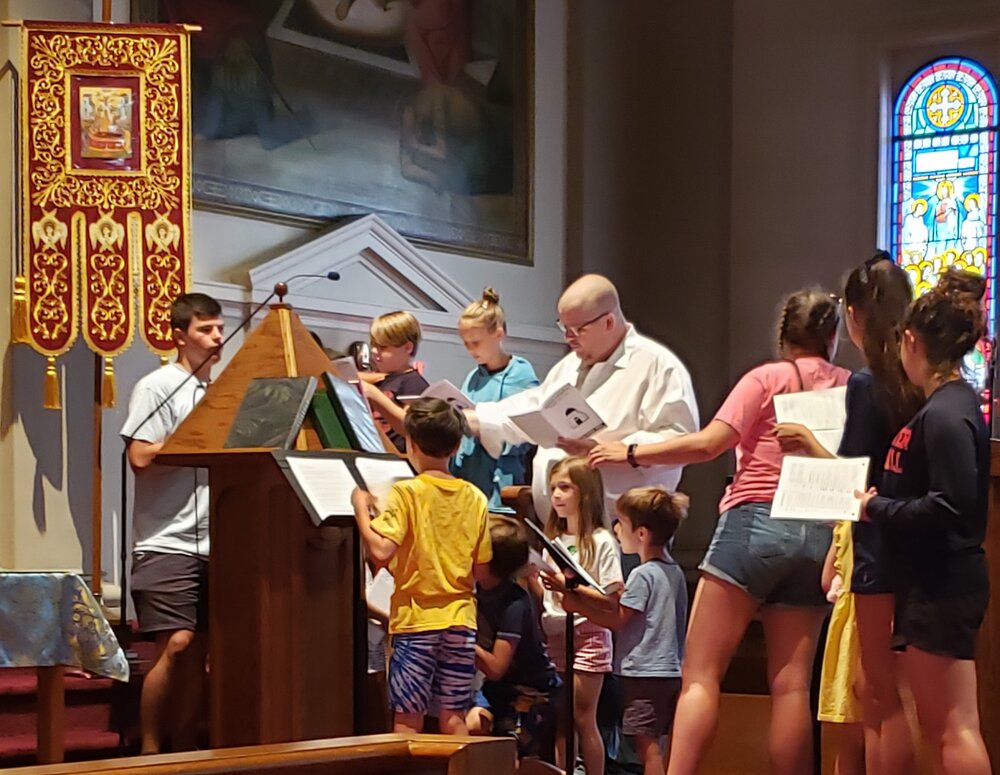 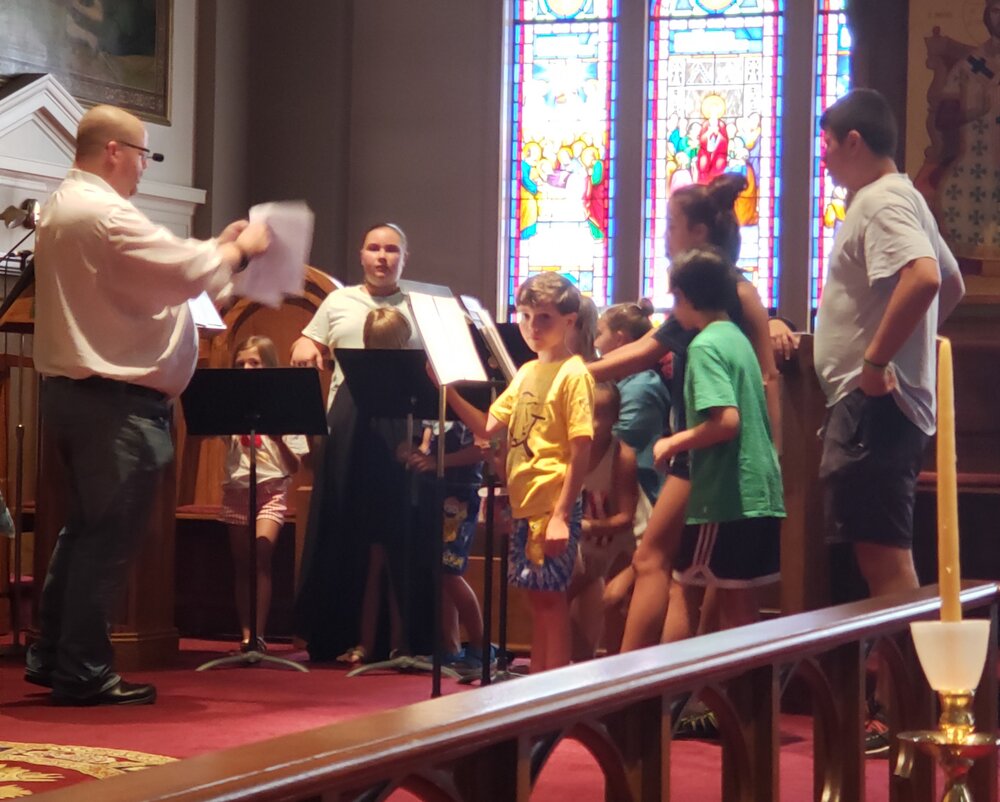 Formation of the Virgin Mary Choir

In 1934 Fr. Constantine Kacoyanis organized the parish’s young people into the first choir at Dormition Church.  An organ was purchased, a choir director and organist were engaged, and the youth raised their voices to chant the beautiful praise-filled hymns to God.

The current adult choir is composed of men and women from the age of 16 and upward who have both a love of our Byzantine church music and a desire to serve their church.  They give generously of their time and talents to help enhance the Liturgy through the chanting of our beautiful hymns.  Music is sung in both Greek and English.

The Dormition Choir is an active member of the Metropolis of Boston Federation of Greek Orthodox Church Musicians.  Members take part in the Federations’s annual conferences, concerts, special services and annual workshops.

Anyone who loves our Orthodox faith and our Byzantine hymns is encouraged to join the choir.  Please contact Richard Barret through the church office: office@dormitionchurch.org or during coffee hour after any Sunday Liturgy.

He can speak with you and listen to you sing. Remember that if you desire this ministry, God will give you the graces for it and your director will teach you proper singing techniques.  Choir does take a time commitment to Sunday liturgies and weekly rehearsals but the rewards are far reaching, and as one of the great saints of the church stated, "Singing is praying twice."

A couple of summers ago, I was participating in a regional choir federation’s convention. I was there to teach a workshop on Byzantine chant, but I was also singing in the convention choir. The Sunday of the convention, I helped to chant Orthros; as soon as the final “Ἅγιος Ἀθάνατος, ἐλέησον ἡμᾶς” of the Great Doxology was over, I made my way up to the choir loft and took my place in the tenor section. It was important to me not to be seen as only “a chanter” or only “a choir person”; instead, I wanted to serve as a church musician, and to do so fully and to the best of my ability.

At the same time, one of the speakers for the convention said something that stuck with me – “We have to revitalize the choirs,” this person said. “And we can’t do it ourselves. There are people who think they can do things all by themselves,” the speaker went on, and I braced myself; the setup telegraphed what was coming. “They’re called chanters.”

The speaker’s words stung, but they underscored for me the reality that there is a wide gulf between the choir loft and the psalterion that the current generation must address, and it is especially incumbent on those in positions of musical leadership to find ways of building the necessary bridges.

The musical situation of the Orthodox Churches in North America is complicated, and especially so in the Greek Orthodox Archdiocese. The Greeks who emigrated to the New World did so at a time of heightened “Westernization” of sacred music in Greece, and the émigrés were in a position of having to perform the barest of essential functions with few, if not zero, resources. Staffing churches with full-time priests was an uphill battle; investing in music programs would have been an impossible luxury. These circumstances combined with cultural pressures to assimilate, and a body of polyphonic music for mixed choirs emerged in the twentieth century, often using organ and sung from choir lofts. This approach has flourished under the leadership of the National Forum of Greek Orthodox Church Musicians, and distinctive musical voices have emerged, such as Frank Desby, George Raptis, Constantine Limberakis, and Anna Gallos. In the artistry and technical mastery of Tikey Zes, perhaps, we can see the form reaching a peak of musical maturity.

There is a problem, however, and it is hinted at with a glance at the National Forum’s catalog of choral publications: the majority of these scores are for the Sunday Divine Liturgy, with the offices taking a compositional backseat. Vespers, if it is served at all, and Orthros, as well as weekday services, have become the domain of the chanter, who is often solo and frequently untrained. In practice, what this amounts to is the perception that the psaltis is only allowed to sing the services that are expected to have minimal attendance.

And yet, in terms of creative production and education, Byzantine chant is enjoying a new flowering in North America. New English-language resources are appearing all the time, such as scores in Byzantine notation by GOA composers such as Fr. Seraphim Dedes, John Michael Boyer, Jessica Suchy-Pilalis, Alexander Khalil, Basil Crow, and Gabriel Cremeens; St. Anthony’s Monastery in Florence, Arizona has also produced a wealth of usable music, in both Byzantine as well as staff notation. Nancy and Stan Takis have made a great deal of English-language staff notation transcriptions available on their website, NewByz.org.

In terms of education, the Archdiocesan School for Byzantine Music, under the guidance of Archdn. Panteleimon Papadopoulos, is currently preparing the second edition of the English-language Byzantine Music: Theory and Practice Guide, and the National Forum has published Frank Desby’s The Notation, Transcription, and Rendition of Post-Byzantine Chant: A Training Manual for the Eastern Orthodox Chanter. A recent grant will enable the publication of John Michael Boyer’s textbook, Byzantine Chant, The Received Tradition: A Lesson Book in the near future. Dr. Nicholas Giannoukakis of Pittsburgh, PA has provided English language instruction through the American Society of Byzantine Music and Hymnology. Holy Cross Greek Orthodox School of Theology has revamped their Byzantine chant instruction under the direction of Dr. Grammenos Karanos; they now offer a certificate in Byzantine music equivalent to what one would receive in Greece, and they have released a CD, All Creation Trembled: Orthodox Hymns of the Passion Service, in Greek and English.

Surely, this distinction between “choir people” and psaltes is a historical anomaly, one that we may reconsider with a posture of good faith and mutual respect. All of us are church musicians, and we are fundamentally doing the same thing: singing in the service of the Church of Christ to glorify God, and doing so in continuity – somehow – with the tradition of the Greek Orthodox Church.

What we have today is, truly, an embarrassment of musical riches if we would but acknowledge it. The days of harmonizing skeletal simplifications of Byzantine melodies in the style of an Anglican hymnal are behind us; we have musical leaders who are flexible, being well-versed in the received tradition of Byzantine chant while also being expertly trained in “Western” music. Such musicians are already charting a path in places like Portland, Oregon, Washington, D.C., and Charlotte, North Carolina. They are capable of being, quite simply, good Greek Orthodox church musicians – and if some of them are specialists, they are specialists for the good of the Church, and not partisans. These are the leaders who will be the architects of the bridges we must build.

In future installments, I will discuss in more detail how our musical culture might unify itself. Certainly there is work to do for our composers, our institutions, our teachers, our singers, our congregations, and our clergy. For the moment, it is vital to recognize that, whatever gaps may exist between musical approaches and repertories, we can reach across those gaps in respect and love, with a common love for Christ and His Church, and work and worship together in that spirit. The sung tradition of the Greek Orthodox Church in all of its facets and expressions is a gift for all who worship with her; to revitalize our choirs, we must make that manifest to everybody.

Richard Barrett is an Orthodox church musician, choral singer and scholar. He is the Protopsaltis of Dormition Greek Orthodox Church in Somerville, MA, where he also sings in the choir. He is also the Byzantine Chant Liaison to the Executive Board of the Choir Federation of the Metropolis of Boston, and the Artistic Director of the Saint John of Damascus Society, which supports the performance and dissemination of Orthodox liturgical and para-liturgical music. From 2014-2015 he was Fellow in Residence at Holy Cross Greek Orthodox School of Theology. From 2005-2012 he was the cantor and choir director at All Saints Orthodox Church in Bloomington, Indiana, and then he was cantor and choir director at Holy Apostles Greek Orthodox Church in Indianapolis from 2013-2014. He has served as an invited clinician and guest cantor at Orthodox churches throughout the country, and recently gave a talk titled “The Mother of God and the Akathistos: How History, Liturgy, and Singing Come Together in the Chairetismoi”. He sings regularly with Cappella Romana and has also sung with the Patriarch Tikhon Choir. Previously, he has performed with ensembles such as the East/West Festival Chorale in Cincinnati, the Josquin Singers in San Francisco, Tudor Choir and the Seattle Opera Chorus in the Pacific Northwest, and in Indiana, the Pro Arte Singers, Collegium Musicum, and the American Guild of Organists Festival Choir. He has worked with conductors such as Alexander Lingas, Peter Jermihov, Vladimir Gorbik, Paul Hillier, John Poole, and John Harbison. He has presented scholarly papers at events such as the International Conference on Patristic Studies at the University of Oxford, the North American Patristics Society, and the Patristic Symposium of the Georges Florovsky Society at Princeton University. A Ph.D. candidate in the Department of History at Indiana University, he is completing his dissertation, titled “Civic Devotions to the Mother of God in Late Antique Constantinople”, under the direction of Deborah Deliyannis. In addition, he holds a B. Mus. in vocal performance and an M. A. in Ancient History, both from Indiana University. He and his wife Megan live in Boston with their two children, Theodore and Katherine.